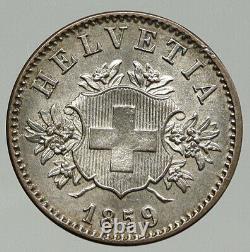 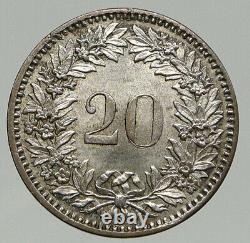 Item: i92417 Authentic Coin of. 20 BB, Wreath formed of two alpine rose springs with flowers tied with a ribbon below.

Switzerland, officially the Swiss Confederation (Latin: Confoederatio Helvetica, hence its abbreviation CH), is a federal parliamentary republic consisting of 26 cantons, with Bern as the seat of the federal authorities, the so-called Bundesstadt ("federal city"). The country is situated in Western and Central Europe, where it is bordered by Italy to the south, France to the west, Germany to the north, and Austria and Liechtenstein to the east. Switzerland is a landlocked country geographically divided between the Alps, the Swiss Plateau and the Jura, spanning an area of 41,285 km. While the Alps occupy the greater part of the territory, the Swiss population of approximately 8 million people is concentrated mostly on the Plateau, where the largest cities are to be found.

Among them are the two global cities and economic centres of Zürich and Geneva. The establishment of the Swiss Confederation is traditionally dated to 1 August 1291, which is celebrated annually as Swiss National Day. It has a long history of armed neutrality-it has not been in a state of war internationally since 1815-and did not join the United Nations until 2002. It pursues, however, an active foreign policy and is frequently involved in peace-building processes around the world. Switzerland is also the birthplace of the Red Cross and home to numerous international organizations, including the second largest UN office. On the European level, it is a founding member of the European Free Trade Association and is part of the Schengen Area - although it is notably not a member of the European Union, nor the European Economic Area. Switzerland comprises four main linguistic and cultural regions: German, French, Italian and the Romansh-speaking valleys. Therefore, the Swiss, although predominantly German-speaking, do not form a nation in the sense of a common ethnic or linguistic identity; rather, the strong sense of identity and community is founded on a common historical background, shared values such as federalism and direct democracy, and Alpine symbolism.

Switzerland has the highest nominal wealth per adult (financial and non-financial assets) in the world according to Credit Suisse and eighth-highest per capita gross domestic product on the IMF list. However, Switzerland is also the most expensive country in the world to live in, as measured by the price level index.

Swiss citizens have the second-highest life expectancy in the world on the UN DESA list. Switzerland is tied with the Netherlands for the top rank on the Bribe Payers Index indicating very low levels of business corruption. Moreover, for the last five years the country has been ranked first in economic and tourist competitiveness according to the Global Competitiveness Report and the Travel and Tourism Competitiveness Report respectively, both developed by the World Economic Forum.

Zürich and Geneva have each been ranked among the top cities with the highest quality of life in the world, with the former coming second globally according to Mercer. However, Mercer also rates those two cities as the fifth- and sixth- most expensive cities in the world to live in. World-renowned expert numismatist, enthusiast, author and dealer in authentic ancient Greek, ancient Roman, ancient Byzantine, world coins & more. Ilya Zlobin is an independent individual who has a passion for coin collecting, research and understanding the importance of the historical context and significance all coins and objects represent. Send me a message about this and I can update your invoice should you want this method. Getting your order to you, quickly and securely is a top priority and is taken seriously here. Great care is taken in packaging and mailing every item securely and quickly. What is a certificate of authenticity and what guarantees do you give that the item is authentic? You will be very happy with what you get with the COA; a professional presentation of the coin, with all of the relevant information and a picture of the coin you saw in the listing. Additionally, the coin is inside it's own protective coin flip (holder), with a 2x2 inch description of the coin matching the individual number on the COA. Whether your goal is to collect or give the item as a gift, coins presented like this could be more prized and valued higher than items that were not given such care and attention to. When should I leave feedback? Please don't leave any negative feedbacks, as it happens sometimes that people rush to leave feedback before letting sufficient time for their order to arrive. The matter of fact is that any issues can be resolved, as reputation is most important to me. My goal is to provide superior products and quality of service. How and where do I learn more about collecting ancient coins? Visit the Guide on How to Use My Store. For on an overview about using my store, with additional information and links to all other parts of my store which may include educational information on topics you are looking for. This item is in the category "Coins & Paper Money\Coins: World\Europe\Switzerland".

The seller is "highrating_lowprice" and is located in this country: US. This item can be shipped worldwide.