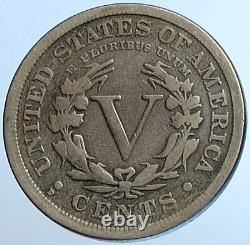 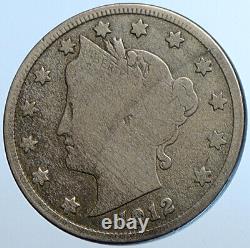 Item: i108523 Authentic Coin of. UNITED STATES OF AMERICA V CENTS E PLURIBUS UNUM, The roman numeral five surrounded with a vegetal wreath. The Liberty Head nickel, sometimes referred to as the V nickel because of its reverse (or tails) design, is an American five-cent piece. It was struck for circulation from 1883 until 1912, with at least five pieces being surreptitiously struck dated 1913. The obverse features a left-facing image of the goddess of Liberty. The original copper-nickel five-cent piece, the Shield nickel, had longstanding production problems, and in the early 1880s, the United States Mint was looking to replace it. Mint Chief Engraver Charles Barber was instructed to prepare designs for proposed one-, three-, and five-cent pieces, which were to bear similar designs. Only the new five-cent piece was approved, and went into production in 1883. For almost thirty years large quantities of coin of this design were produced to meet commercial demand, especially as coin-operated machines became increasingly popular. Beginning in 1911, the Mint began work to replace the Liberty head design, and a new design, which became known as the Buffalo nickel, went into production in February 1913. Although no 1913 Liberty head nickels were officially struck, five are known to exist. World-renowned expert numismatist, enthusiast, author and dealer in authentic ancient Greek, ancient Roman, ancient Byzantine, world coins & more. Ilya Zlobin is an independent individual who has a passion for coin collecting, research and understanding the importance of the historical context and significance all coins and objects represent. Send me a message about this and I can update your invoice should you want this method. Getting your order to you, quickly and securely is a top priority and is taken seriously here. Great care is taken in packaging and mailing every item securely and quickly. What is a certificate of authenticity and what guarantees do you give that the item is authentic? You will be very happy with what you get with the COA; a professional presentation of the coin, with all of the relevant information and a picture of the coin you saw in the listing. Additionally, the coin is inside it's own protective coin flip (holder), with a 2x2 inch description of the coin matching the individual number on the COA. Whether your goal is to collect or give the item as a gift, coins presented like this could be more prized and valued higher than items that were not given such care and attention to. When should I leave feedback? Please don't leave any negative feedbacks, as it happens sometimes that people rush to leave feedback before letting sufficient time for their order to arrive. The matter of fact is that any issues can be resolved, as reputation is most important to me. My goal is to provide superior products and quality of service.

How and where do I learn more about collecting ancient coins? Visit the Guide on How to Use My Store. For on an overview about using my store, with additional information and links to all other parts of my store which may include educational information on topics you are looking for. This item is in the category "Coins & Paper Money\Coins: US\Nickels\Liberty (1883-1913)". The seller is "highrating_lowprice" and is located in this country: US.

This item can be shipped worldwide.